What are we doing?

This project helps resistance groups and concerned individuals send handwritten postcards to Democratic primary voters in districts represented by New York State Senators in the Independent Democratic Conference (IDC). The goal: use a personal touch to help New Yorkers get informed, energized and voting. People who don’t respond to traditional voter outreach like flyers, campaign ads or calls do respond to handwritten postcards. Other groups like Postcards to Voters have used large groups of volunteers to increase Democratic turnout in forgotten elections, and they’ve won races even in deep red states.

Postcards are cheap, easy to write and make a big difference!

The IDC is a group of 8 fake Democrats who have swung the New York State Senate to Republican control. Even though there are a majority of elected Democrats in the NYS Senate, the IDC’s alliance with the Republicans allows the GOP to control the agenda. The IDC claims to be “progressive,” but in reality, their empowerment of the Senate Republicans blocks a whole host of legislation in New York State, including education funding, tenant protections, reproductive rights bills, and early voting/automatic voter registration laws. The IDC has critics in every level of government, including Senator Gillibrand and the entire New York Democratic Congressional delegation. 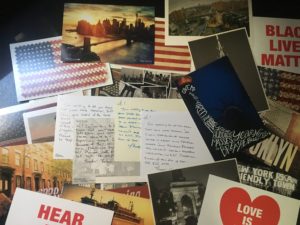 How does this postcard project work?

Hi (first name),
Concerned about health care? Your Senator, Jeff Klein, ran as a Democrat but works for Republicans. The GOP, Klein and his “IDC” block health care and other crucial bills in the State Senate.  Tell him to stop (718)822-2049—Help us vote him out in 2018!  www.makenytrueblue.org
Thanks, (your first name), NY

This is a great project for groups. Throw a postcard party in your living room or include it as an activity for your resistance group.