We created the MONEY TALKS Campaign as a way to hold our representatives accountable. Many of them campaigned as Democrats, but have failed to uphold their promises and in fact enable the continued Republic majority in the NYS Senate. MONEY TALKS will focus on direct actions from March 26th-30th that empower New Yorkers to lobby their State Senators on important issues in the about-to-be-passed state budget.

We’re here to change that. Here are 3 issues we’ve decided to focus on this year, please help us to educate the public about what’s happening behind closed doors in Albany: 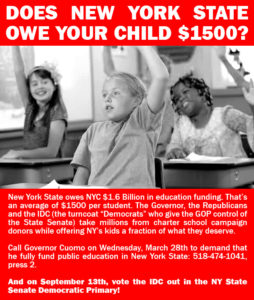 THE IDC HELPS REPUBLICANS CHEAT OUR PUBLIC SCHOOLS – ACT NOW TO STOP THEM!

In 2006, a New York State court found that underfunding of public schools violated students’ right to a “sound and basic education” and ordered the state to increase basic operating funds by $5.5 billion over four years. It’s 2018, and our schools have not seen that money. The Alliance for Quality Education, a NY advocacy group, says, “The IDC supports Trump’s education policies, which means underfunding public education and siphoning money into charter schools and vouchers.”

WHAT YOU NEED TO KNOW: For 2018-19, Democrats propose a $1.5 billion increase in school aid, with the remaining funding paid by 2021. Republicans, with the support of the IDC and Simcha Felder, propose a $957 million increase. Governor Cuomo proposes $769 million, with no provision for the balance. Last year’s budget gutted the funding formula to shortchange needier regions, and granted privately run charter schools double the amount per child that public schools received. Now Cuomo, the Republicans and the IDC are proposing millions of dollars more in subsidies to charter schools while filling their accounts with charter school campaign donations. Charter school interests (including De Vos family holdings) contributed nearly $700,000 to IDC members in 2017 alone.

WHAT YOU CAN DO: The budget will be decided by March 30th, so we have to act NOW. Click here to signup for our call relay to Governor Cuomo on Wednesday, March 28th to demand that he fully fund public education in New York State: 518-474-1041, press 2. And on September 13th, vote the IDC out in the NY State Senate Democratic Primary! 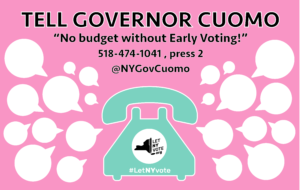 Early Voting: New York is closer than ever before to joining the other 37 states that have early voting and allow eligible voters to cast their ballot on a day that’s convenient without worrying about choosing between their work, family and their vote. This step forward came about because New Yorkers like you demanded it. But the fight isn’t over and we fear that support for Early Voting in Albany is wavering. Now that we are in the final push — our representatives are meeting in Albany now to decide the fate of Early Voting, it’s up to us to demand that our leaders include it in the State Budget. It doesn’t matter whether you’re a working parent, student, senior or service member — everyone deserves an opportunity to get to the polls and vote when it’s convenient.  We joined together with Brooklyn Voters Alliance and other local grassroots groups to organize a call relay to Cuomo’s office on Monday March 26th to let him know we demand that early voting become law in NYS.

Transportation:  The transportation infrastructure in NYS is nothing short of a disaster.  With signal problems plaguing the subways and metro north, commuters are starting to wonder whether they need to find other ways to get to work.  The government seems to be more interested in expanding the system than in keeping the existing one running.  Rather than putting on bandaids, some comprehensive work needs to be done to update existing systems and get our transportation running again.