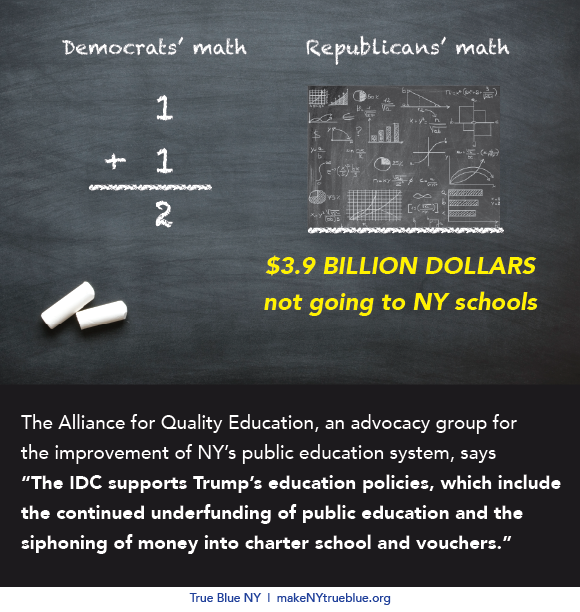 In 2006, the NYS Court of Appeals found that by underfunding our schools, New York State is violating students’ constitutional right to a “sound and basic education.” Schools were ordered to receive a $5.5 billion increase in basic operating aid, known as Foundation Aid, statewide over the course of four years. It’s 2017, and our schools are still waiting to see that money.

WHAT YOU NEED TO KNOW: The Democrats are asking for a $2.1 billion dollar increase to make sure that our schools have the necessary funding to educate our kids. The Republicans, with the support of the IDC and Simcha Felder, propose a $960 million increase, and Governor Cuomo only wants to raise it by $428 million! The IDC and Republicans also want to alter the formula for calculating Foundation Aid in a way that will further shortchange poorer and needier areas both upstate and downstate.

The Alliance for Quality Education, an advocacy group for the improvement of NY’s public education system, says “The IDC supports Trump’s education policies, which include the continued underfunding of public education and the siphoning of money into charter school and vouchers.”

WE CAN’T LET THEM GET AWAY WITH THIS.

The IDC get personal perks in exchange for empowering the Republicans, like better office space, bigger staff budgets, and more computers. They also get allocations for their district, underfunding the rest of the state.

Who is Simcha Felder?

A Brooklyn State Senator who runs on the Democratic, Republican and Conservative Party lines, and caucuses with the Republicans to get more for his district.

The Senate Republicans love Donald Trump
They are 100% anti-choice and anti-LGBT. They promote anti-immigrant legislation that harms entire communities.

The IDC has NO real influence to push progressive legislation

By giving the Republicans control of the NY State Senate, the IDC and Simcha Felder have let them block: